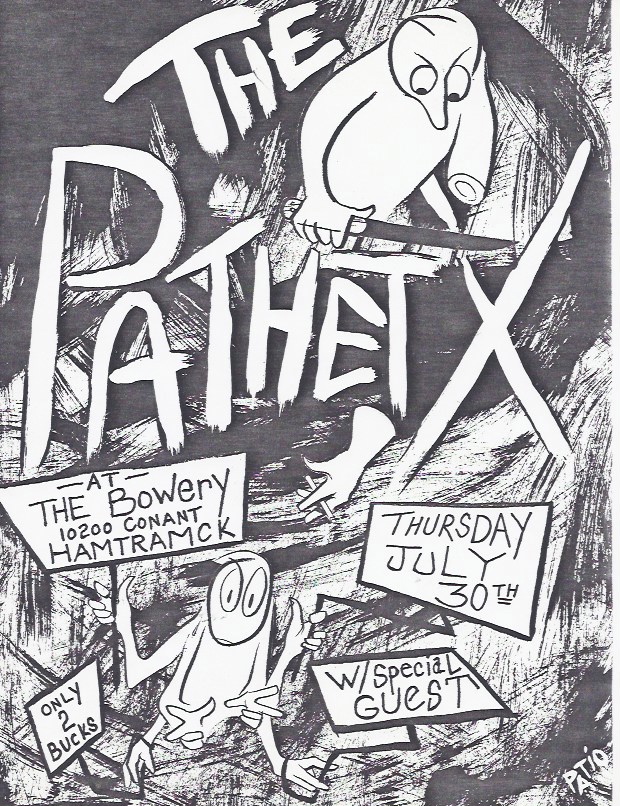 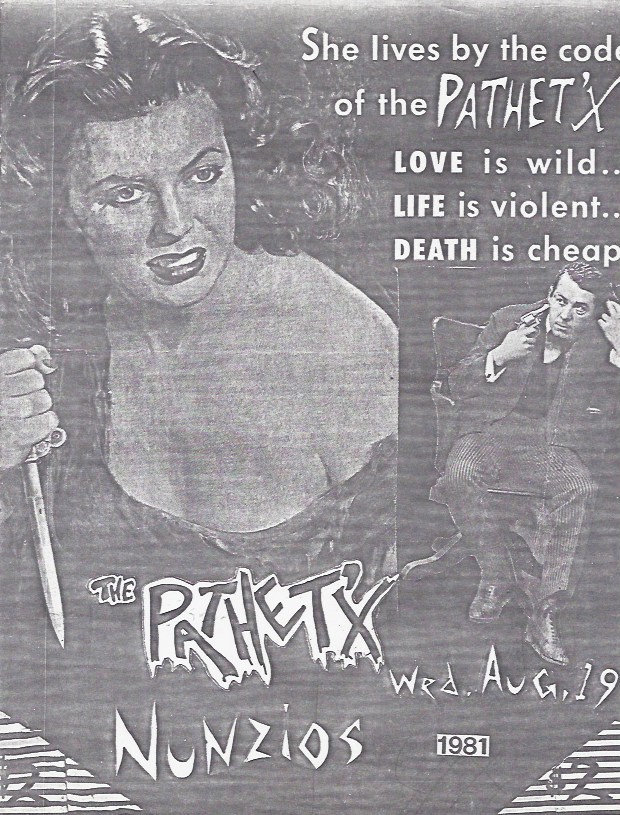 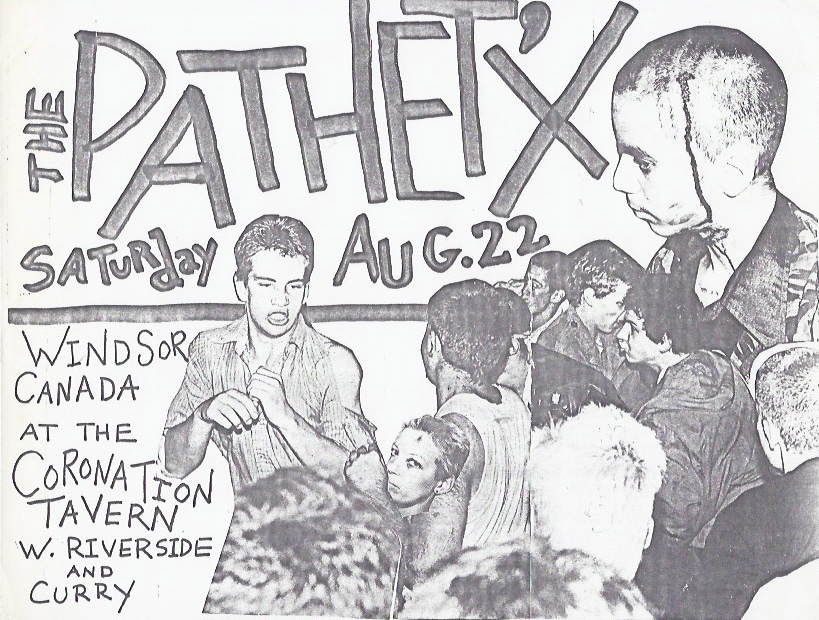 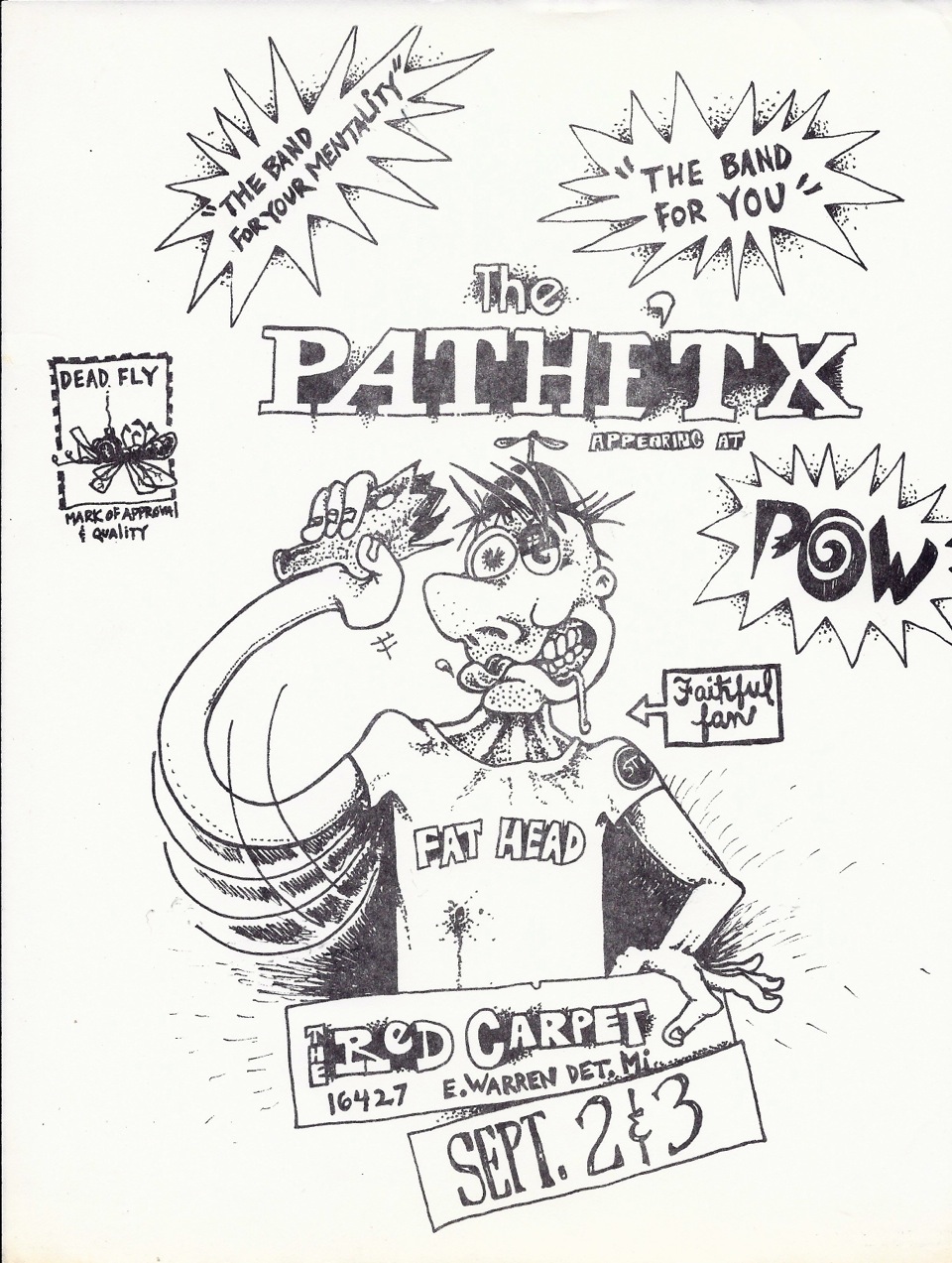 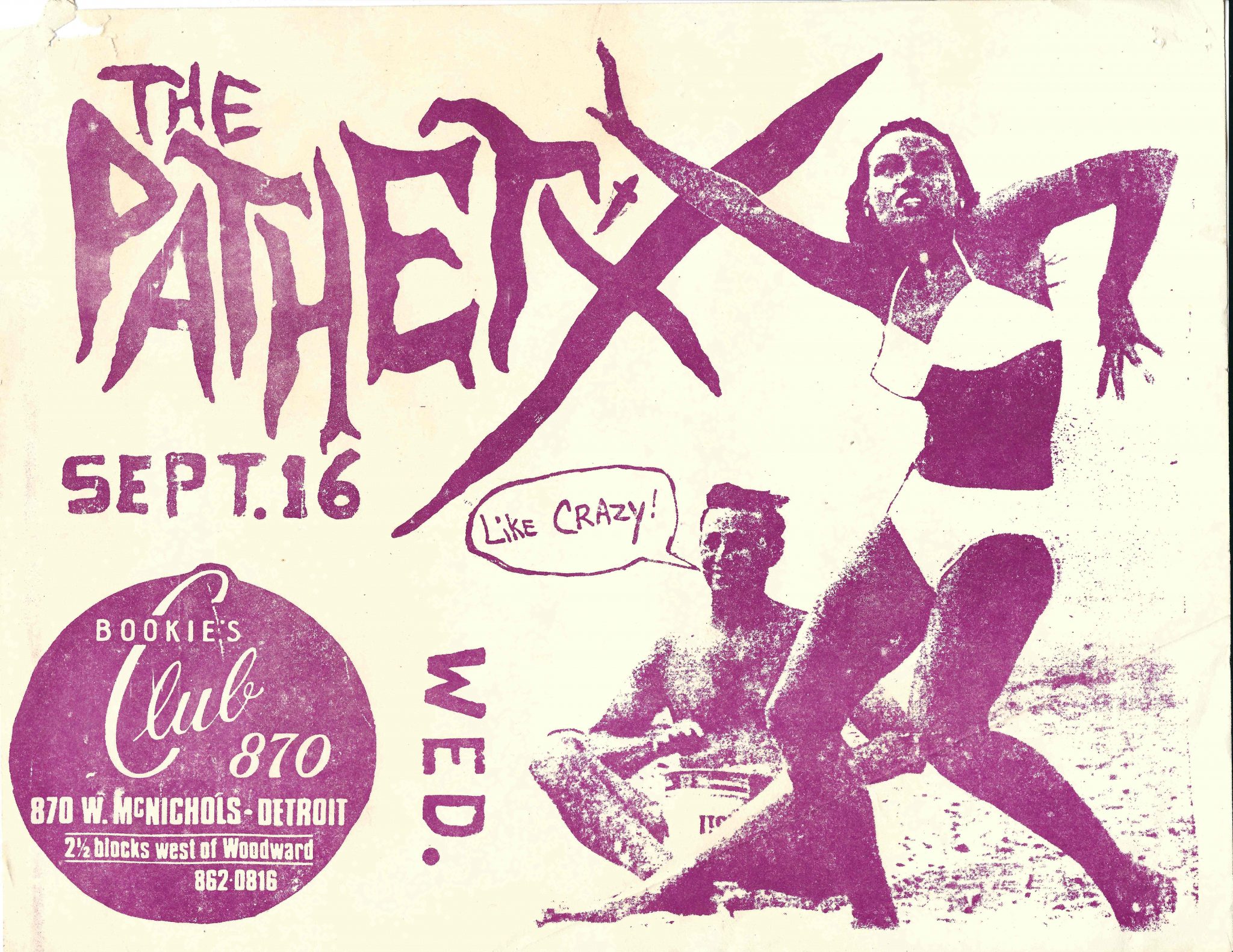 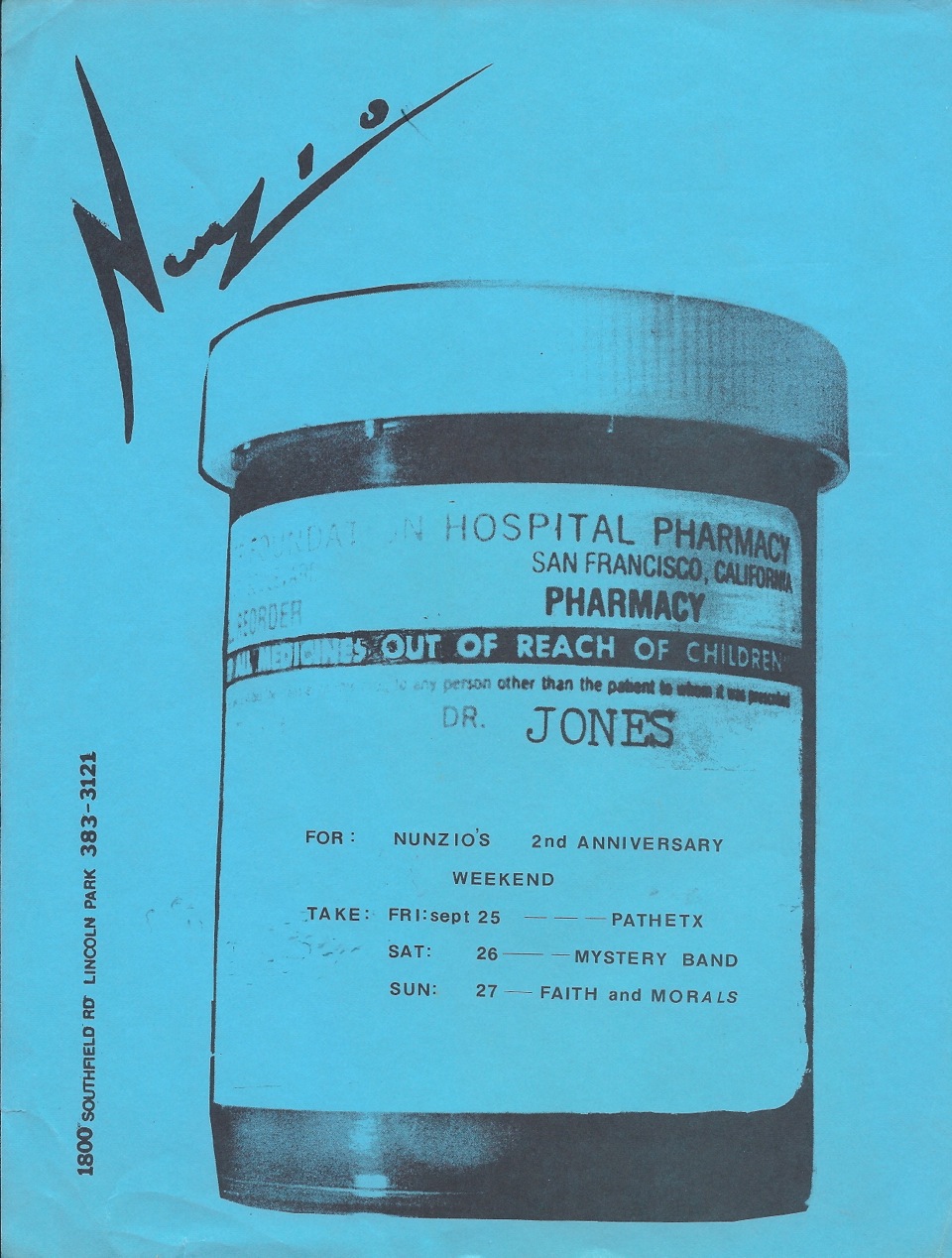 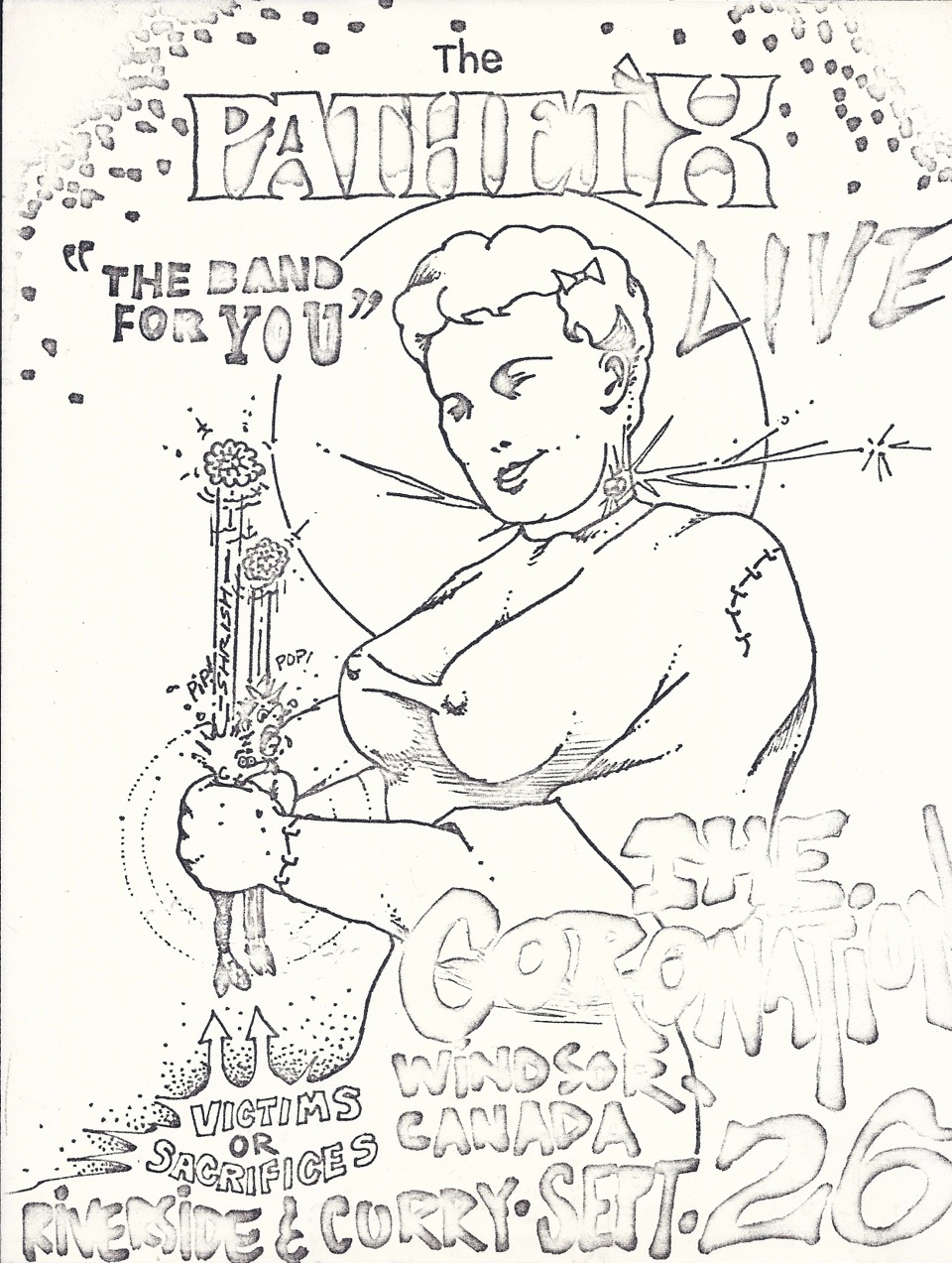 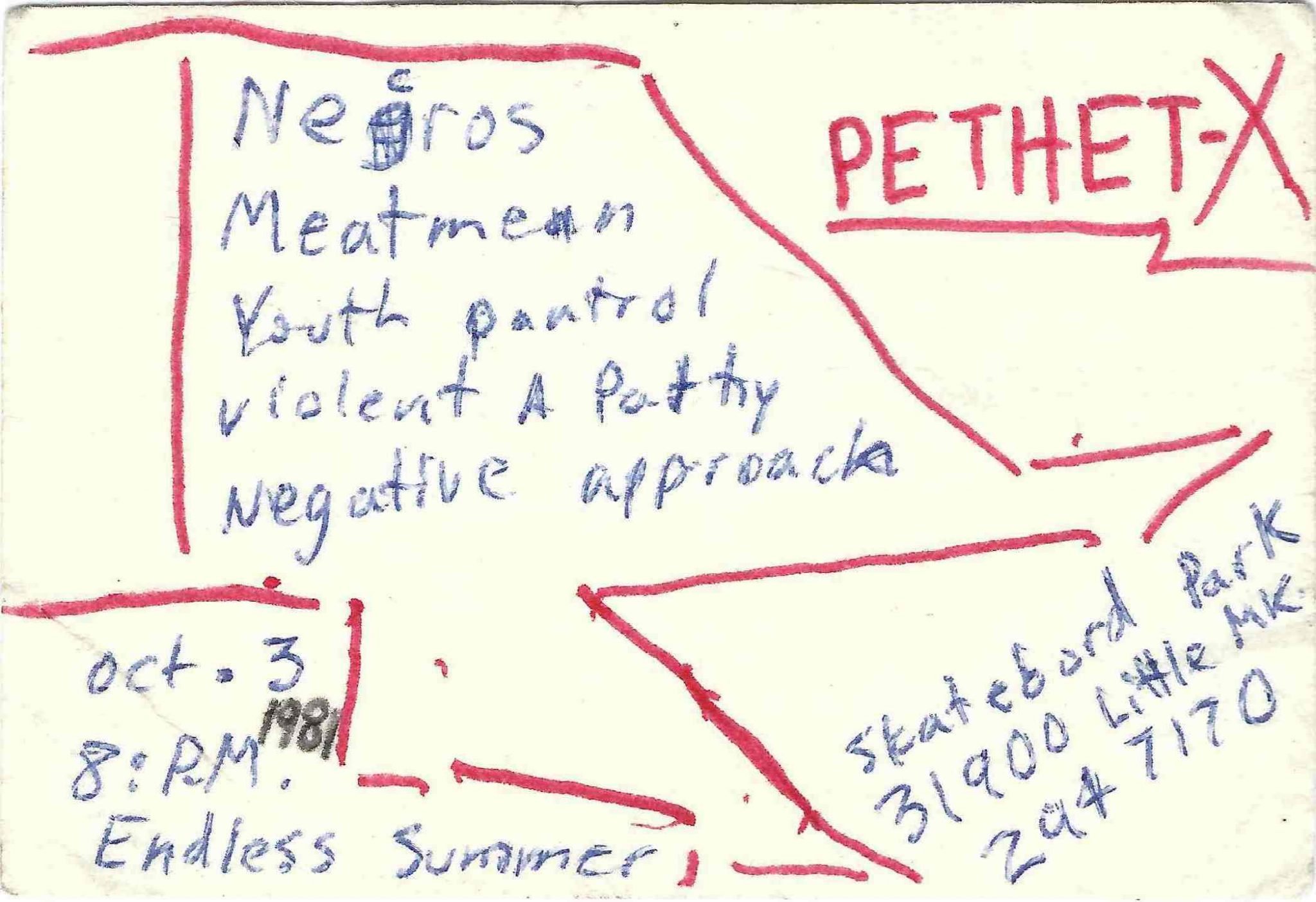 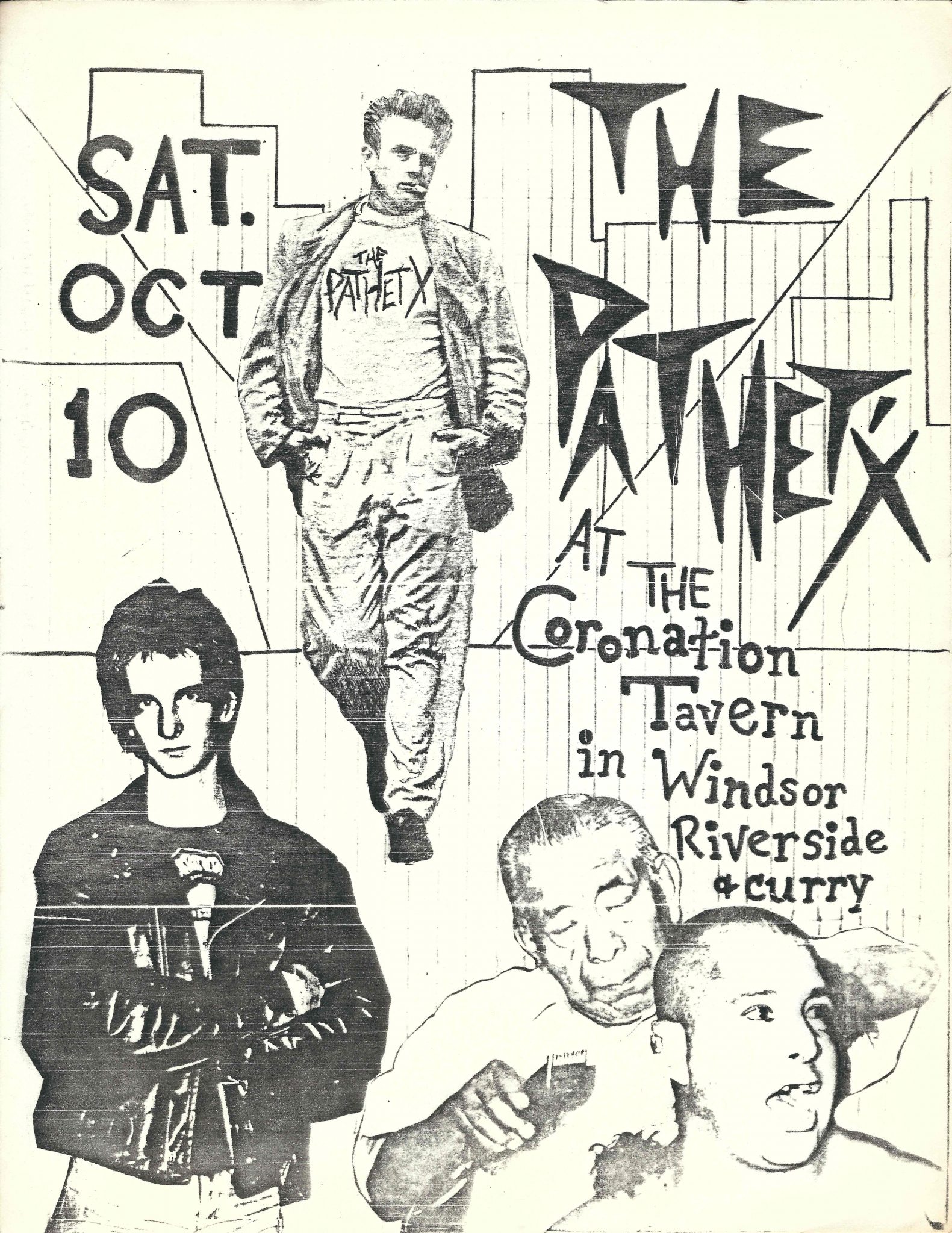 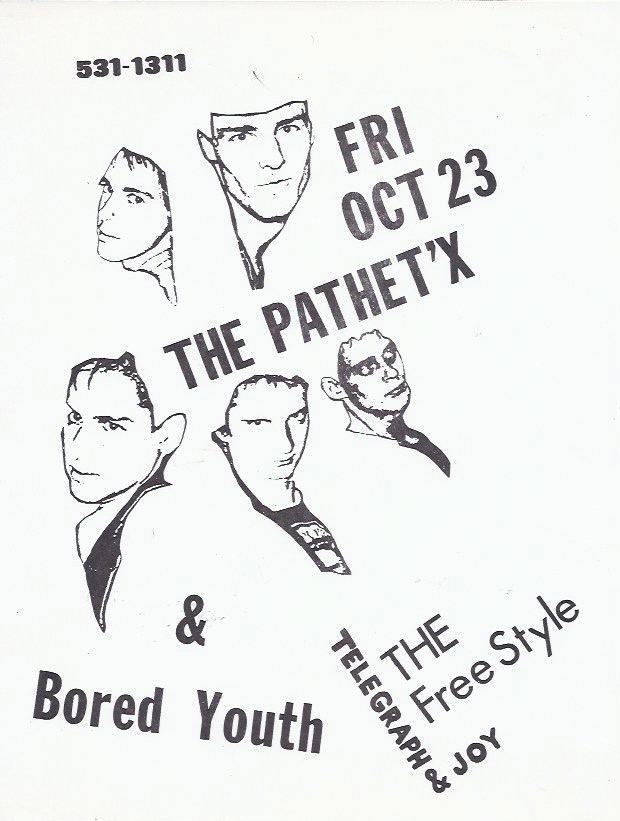 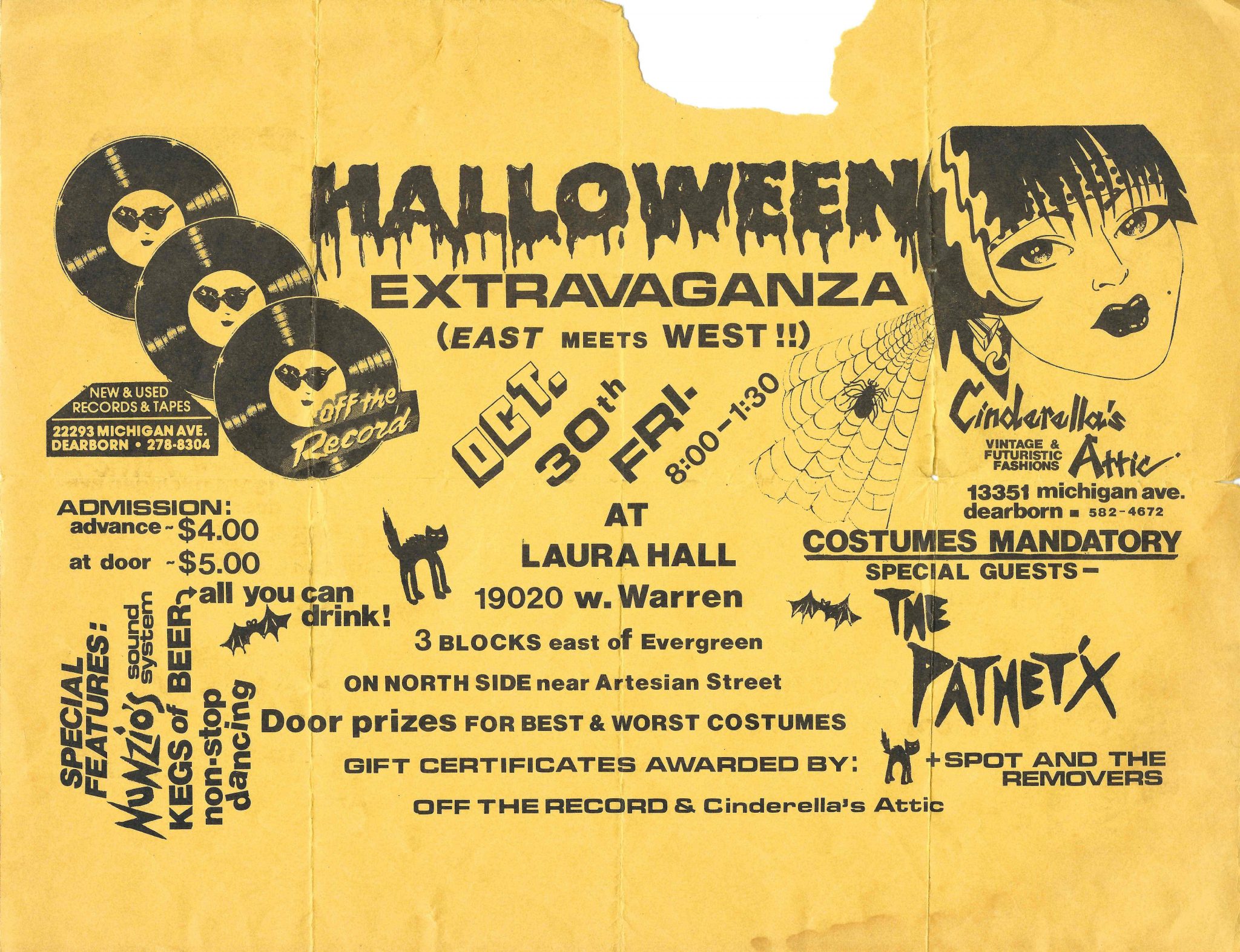 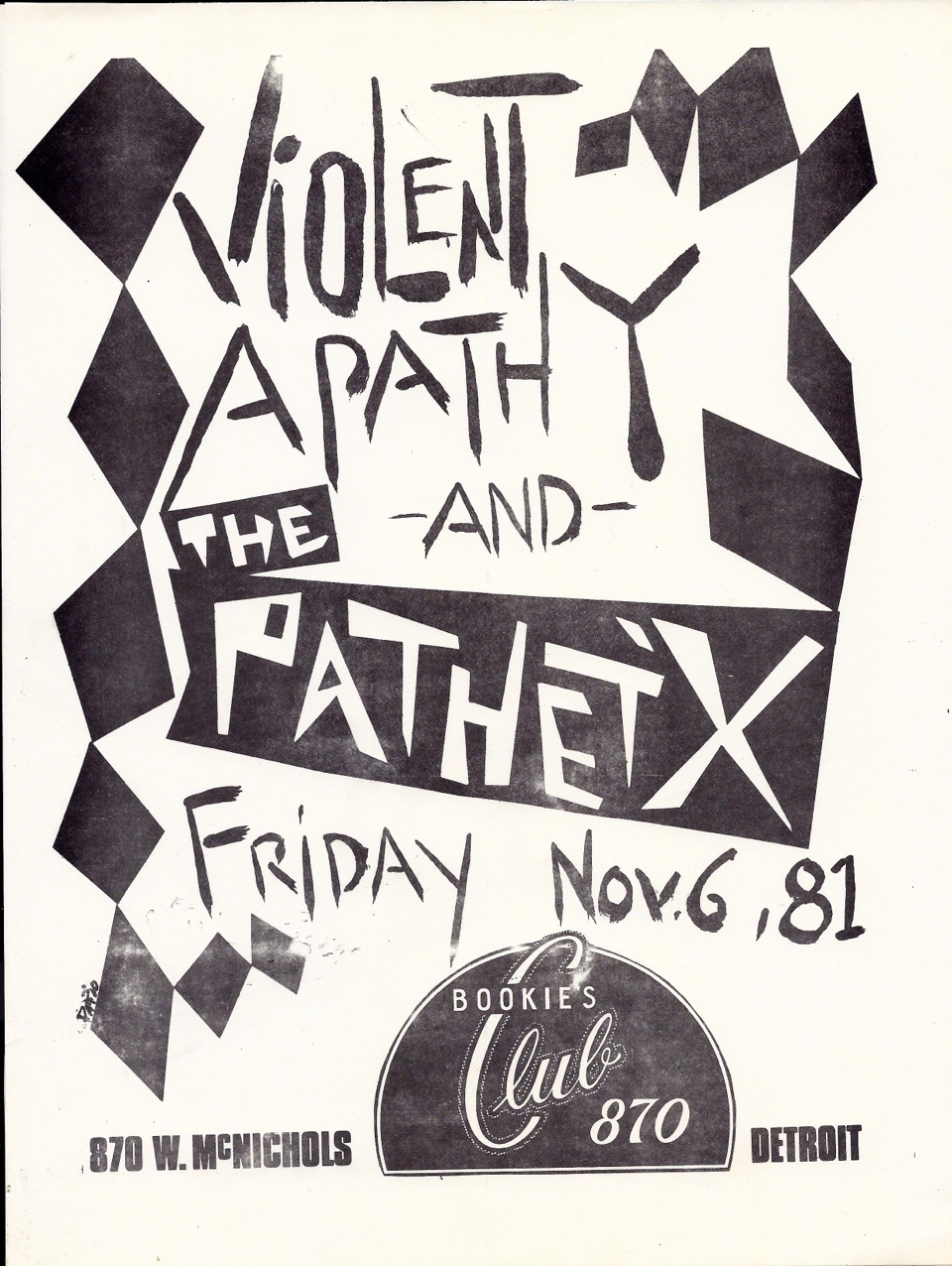 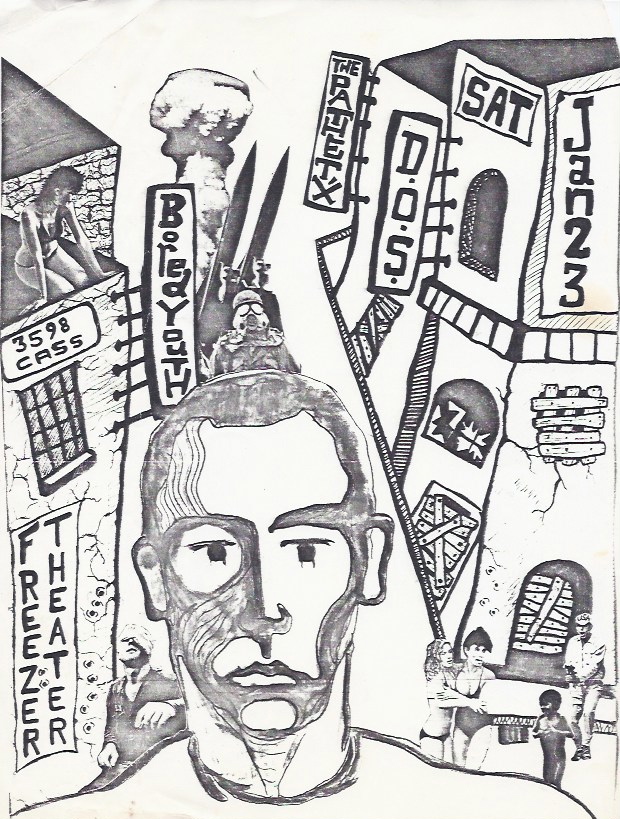 The Pathetx was a group that happened to be around in the transition from the first wave punk bands around Bookie’s into the development of the Detroit hardcore scene. But, the band never saw themselves as part of the later scene even though the group was influenced by some of the bands coming out of California at the time like the Dead Kennedys and the Circle Jerks.

Formed around 1980, The Pathetx was made up of mostly Dearborn residents in their early 20s when Guitarist Greg Kutcher and vocalist Mark Leavitt, who had been working together in a cover band – doing Led Zeppelin and the like, became more interested in wanting to do covers of Iggy Pop tunes.

The group became involved with Jim and Steve Shaw, two brothers involved in the underground/punk rock scene in Detroit. Jim Shaw was the co-owner of the vintage clothing store Cinderella’s Attic – a place where bands would often buy clothes as well as drop off flyers for shows while Steve Shaw was a photographer and helped several bands get their start in the early hardcore scene. Steve Shaw says he was working at Jacobson’s department store in Dearborn at the time when a co-worker, Kutcher, give him a rehearsal tape to listen to. Shaw managed The Pathetx by getting them bookings at various venues, photos, and helped them create flyers. Among the bookings Shaw made possible was putting the group on a bill with the Necros and Negative Approach at Endless Summer Skate Park in 1981 which announced the arrival of area’s hardcore scene.

The Pathetx had been a band for a short time before Michael “Mick” Goldwater, a 16-year-old from Wayne, was added to the mix after meeting Kutcher at a Dearborn music store. Kutcher approached Goldwater because he felt the teenager looked the part and the group was having a hard time with its original bass player.

The Pathetx played at Bookie’s but saw Nunzio’s as their home turf. Kutcher and, fellow guitarist, Tom McHenry say the group was also popular in Canada – playing often at the Coronation Tavern in Windsor. The group also played at the Freezer Theater as well as other later venues in the first wave/early hardcore scene in Detroit.

Kutcher says unlike most of the hardcore bands, The Pathetx wasn’t as angry or as serious with songs that often leaned on humor, such as doing a cover of “Climb Every Mountain” from the musical “The Sound of Music”.

But, as the hardcore scene started to develop, The Pathetx started to ask themselves where they fit in, where they were going, and what they wanted to do. McHenry says Goldwater, who was the youngest in the group, seemed more interested in the new sound while other members of the band wanted to continue in their developed style.

After about two years together, about 18 months playing out including some demos recorded in a home studio in Macomb County, The Pathetx called it a day. McHenry went on to form a band called Lucky Charms as well as The Happy Tom Show. McHenry is currently in a band called Petals of Power. Kutcher started a group called Gone Morose that later became Soft War. Ted Meek was later part of the band Shock Therapy featuring Tex Newman of R.U.R. Goldwater became known as a DJ in the scene under the name McNasty.

In March 2020, Third Man Records released the studio recordings of The Pathetx for the first time.

To celebrate, the band held a record release show at the UFO Factory in Detroit. Due to the death of original drummer Ted Meek, his son – Keith Smith of the Detroit band The Beauticians, filled in to complete the band.

Have a story or information to share about The Pathetx? You can do that here.

One thought on “The Pathetx”